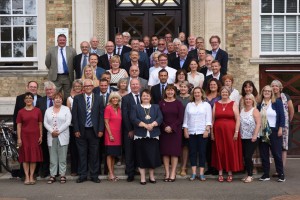 It generally seems to be a nice day for the July council meeting but then it is summer time and this year we are well into a fine summer spell. Temperatures have been pleasantly in the mid to upper 20s and there’s been no rain for a good couple of weeks now. Today it’s a tad cooler with a pleasing breeze but it’s still going to be rather warm in the council chamber.

However we have a short agenda today and we will be out for lunch. Makes you wonder why we’re wasting a little public money on a meeting without any substantive business.

We seem a little thin on the ground, two of the Tory ‘front bench’ seem to be missing, and we have apologies from 7 apologies in total across all parties.

Prayers today are lead by a Baptist, the Rev John Smith from Godmanchester, and he does go on.

As befits the day announcements are brief with only two items. Times have changed. I can remember multiple announcements at previous meetings. Does this reflect the fact that the Council simply does less?

At least we have two public questions. The first is from the evergreen Anthony Carpen who asks about buses especially those that may or not be used by students entering higher education in the new academic year. He’s answered by the Leader (the responsible Tory is absent). The answer is appropriately defensive and correctly says ‘not our job Guv’ because bus services are now a Combined Authority responsibility.

The second question from Ms Ysanne Heald is about Milton Road Library which is being enabled to continue in business by virtue of a lease of its property (and that of an adjacent community centre) back to CCC from This Land. The questioner asks why the lease is only 25 years. Good question. Is This Land taking a purely business decision without regard to the values of its owner viz CCC? The answer is legalistic. Strange that for other properties which it is proposing to use (like the new HQ building) CCC is insisting on much longer leases.

There are no petitions so we’re now into the need for Council to endorse its Single Equality Strategy. Do we really need a debate? Thankfully we don’t have much of one but there are still two councillors who feel obliged to speak. The second manages to link it to all the other failings of which he/she thinks CCC is guilty! No matter it is a political forum. Endorsed by acclamation.

Now for more excitement: we note the Treasury Management Quarter 4 Report. This time there are no speakers. Noted by acclamation.

We’ve got two motions. The first is from Labour and asks that no access zones be trialled at three primary schools in order to control pollution. There’s said to be ClientEarth study which says that 60% of people would support such an imitative. The problem with the motion is that it doesn’t talk about the necessary police support and, more importantly, doesn’t ask for schools to be consulted first! A Lib Dem amendment addresses these two points but the mover of the motion is unwilling to accept it. Leader speaks positively about the amendment but says the motion is too deeply flawed to merit support in any way.

Amendment lost 17 to 35 (Lib Dems and Indies supporting). Now onto debating the motion unamended. I speak and although I agree with others that it’s a poor confused motion I say that the issue is so important that I will support it (to some extent I was saying that this is a bandwagon I wished to to get on). I highlight the need for CCC to act consistently. Funding bikeability would be a good start and doing its bit to get primary schools built in the centres of communities and not on their perimeters and certainly not adjacent to major roads would also be positive. Orchard Park scores badly on both counts. I also ask how This Land might approach the issue: would it prioritise maximising returns over the health of our children? If you want to see and hear what I actually said click here.

Generally very supportive speeches including committee chairs being willing to follow up.

Then a brilliant idea: Lib Dems propose referring issue to the ‘appropriate committee’. Now we debate this. But Tories get difficult again instead of being gracious (not their idea). But they do ‘commit’ to the follow up. However motion is still on the table.

Motion is lost 13 (Labour plus some others including me) to 33 with 8 (the other Lib Dems) abstentions.

Motion number 2 is a non-policy motion about Motor Neurone Disease (MND). It’s an important if worthy issue and asks that the Council ‘adopt the MND charter’. We do of course and as a result of the debate we learn more about this dreadful disease. Lots of supportive speakers. Motion is supported by acclamation unanimously.

We finish off with questions. First for the Combined Authority (CA) and it’s scrutiny committee. There are four. Two for the Leader of CCC who’s a member of the CA.

The first is about the wisdom of the pause in GCP activity requested by the CA. Response as expected with a very political statement against perceived Lib Dem policies. Now all of a sudden we’re into a shouting match, bad tempers all round.

Number two is about the impact of the pause on new development planning activities. Another answer which adds little.

Now a question for the chair of the scrutiny committee asking about the challenges of doing scrutiny well. Answer highlights portfolio holders with insufficient command of their briefs as a result of frequent changes of responsibility, poor papers with insufficient detail … (runs out of time) … (resumes) … and apparently arbitrary absence from a recent meeting. Supplementary asked about recent letter from the Minister warning that funding might be withdrawn if there were no evidence of collaborative working.

Finally a question to one of the scrutiny members asking about his and others’ absence at the recent scrutiny. Answer disappointingly ‘legal’.

Then there are written questions. One is about the new Oxford-MK-Cambridge England’s Economic Heartland grouping and how this will relate to the multiple groupings which we already have (CCC, GCP, CA etc) which elicits a bland ‘everything will be all right’ response. The other is about potholes and asks if road inspection frequencies should be increased. There’s an ‘everything is all right just as they are’ response.

1145 and we’re done and time to get our photo taken. Check it out above. I managed to get myself into a position whereby I could be seen without having to stand on my toes.